Well it’s all happening down at the Willi Wetlands, spring is definitely in the air (as most hay fever sufferer will attest to) and the local birds are busy with their breeding and nesting activities. The migratory waders have started to show up in decent numbers albeit a bit late this year, mostly likely due to the very wet conditions up north and in our central regions.

With all the recent rain the lakes are currently full to the brim and the overflow drains are discharging fresh water in to the bay. The water levels are very close to the bottom of the bridges on the western lakes and most of the perching rocks are now under water.

With the warmer weather we are starting to see more reptile and amphibian activity. Most morning/evenings you can hear the Common Eastern Froglet and both Striped and Spotted Marsh Frogs calling. Eastern Long-necked Turtles are currently breeding so keep an eye open for strange small holes in the grassed areas near the water for emerging baby turtles, these guys are about the size of a 20 cent coin and will appreciate not being stepped on. I nearly stepped on one the other day that was sitting in the middle of the path around Quest Lake.

If you happen to be out early in the morning/evening keep an eye open for one of the 3 Rakali that have made their home in the Western Lakes. Rakali like to forage for fish, crustaceans, shellfish, small birds, bird eggs, mammals including rats and mice, frogs, and lizards.

As usual for this time of the year Tiger Snakes, Blue-tongued Lizards and Tussock Skinks are active and can often be seen sunbaking or looking for food on the margins of the fresh water lakes and around the saltmarsh.

So far this season there have been 7 breeding pairs of Black Swans, to date they have produced 19 cygnets. With at least one pair still nesting it’s expected the number of cygnets will increase within the next week or two.

What’s about at the moment? Some interesting bird species around at the moment include a pair of juvenile Black-shouldered Kites, Brown Falcon, Nankeen Kestrel, Horsfield’s Bronze-Cuckoo, Fan-tailed Cuckoo, Great Crested Grebe, Blue-winged Parrot and Blue-billed Duck.

As for the migratory waders, Red-necked Stint, Common Greenshank and Bar-tailed Godwits are now about with the notable exception of the Sharp-tailed Sandpipers. The Sharpies appear to have cut short their usual migration route from Arctic Siberia to Southern Australia and have propped for the time being at our flooded inland lakes and waterways. They may start showing up later in the year, after the inland areas dry out a bit!

If you would like a full list of the bird sighting for the Willi Wetlands check out the “Jawbone Flora and Fauna Reserve” hotspot on ebird. You can use ebird as a guest so you don’t have to sign up to use this useful, fun and free resource.

The Friends of the Williamstown Wetlands in conjunction with HBCC will be hosting a bird walk and BBQ on the 27th November 2022 from 10am to noon.   All welcome.

Foxes Day Out at the Beach

Early in the morning at low tide these foxes were scavenging out on the sandbar and were observed from a hidden location.

Initially they were about a kilometre away and had no idea they were being watched. As soon as they got within 30 metres they could sense something was wrong! (A big lens sticking out of a saltbush will do that). The image of the fox starring directly into the camera lens was the exact time of dicovery!  Net result, foxes exited stage right at a great rate of knots. 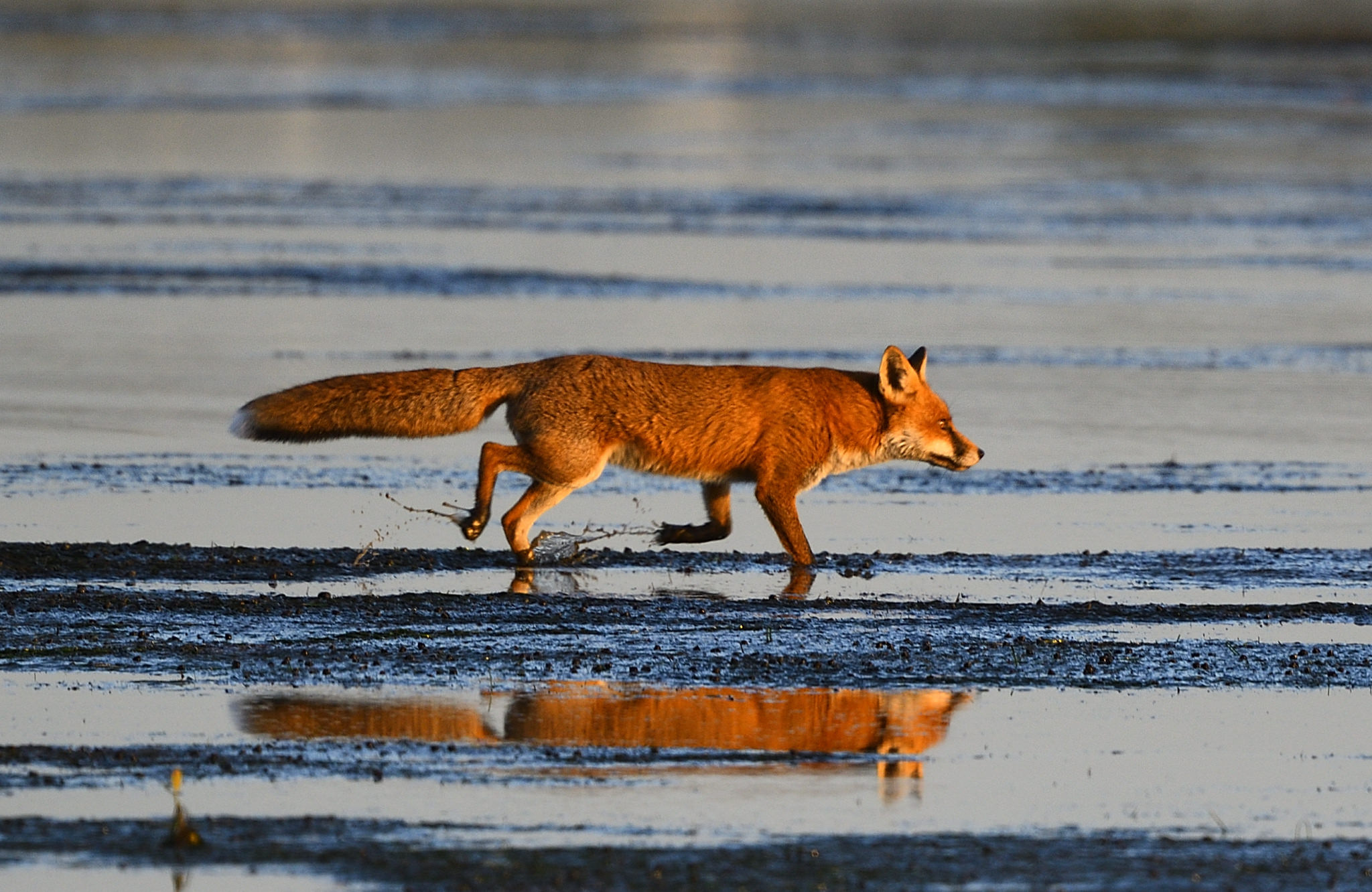 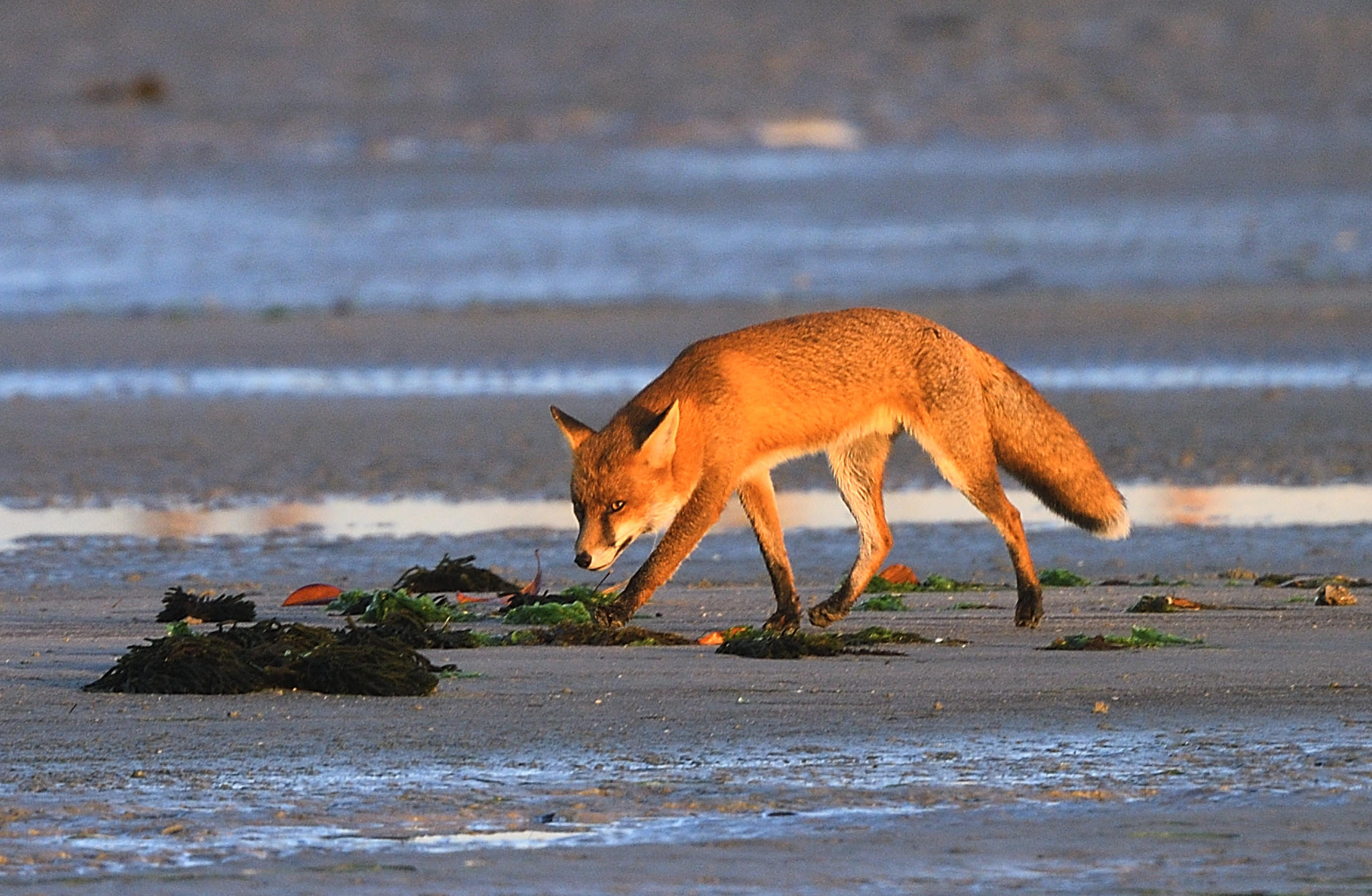 As the number of reported infections with the Covid-19 virus rose and fell, so our activities—like most aspects of life in Melbourne—waxed and waned. We responded by emerging to meet and to work when we could, and restricting contact to email when we couldn’t venture out.

This meant that committee meetings were less frequent, with more decisions taken after consultation by email and news distributed that way, too, as it was to the wider membership through newsletters and the forwarding of, for example, Council notices.  Workdays had to be fitted into the revised calendar, too, but we were able to add to our Sunday morning efforts with some ‘pop up’ mid-week planting session on land controlled by Council and Parks Victoria for those who could be available. Fortunately, the Clean Up Australia event fell within one of the windows between lockdowns, and our effort, organised as usual by Peter Smith, was able to go ahead.

Despite the lockdowns, the Rotary Club of Williamstown went ahead with their project to mark one hundred years of Rotary in Australia—the construction of a new bird hide on the south side of the eastern lake. The view from the first bird hide, on the northern shore, has been largely obscured by rampant growth of aquatic vegetation, but the new hide is on higher ground and from it the view is panoramic. It’s on Crown Land managed by Parks Victoria, and permission had to be obtained from that body. The fence at the end of the Arboretum will be realigned and a new path is in place to facilitate access to the hide.

With assistance of Council, a group of students from the Bayview Campus of Williamstown High School devoted some of their ‘service’ time to working in the Jawbone Reserve in May. On four afternoons they planted indigenous plants on a patch near the school; weeded a patch near the causeway and then planted there, too; and removed stakes and guards from a site where corporate volunteers had planted in 2019.

Over the years we have expressed to Council and to Parks Victoria our concerns that people and dogs, travelling along the sandbars at low tide, were disturbing migratory waders and shore birds feeding there in the warmer months. We are pleased to note that both authorities have installed signage and made other changes to access to deter such intrusions.

The device that maintains the level in the eastern lake has been repaired, and with persistent rain (especially in 2020) we have seen the lake rise to something more like its original level. Planning for stage two of the project to renovate the lake, Council engaged Practical Ecology last year to conduct an impact assessment on proposed control of over-abundant vegetation (Typha sp.) and possible desilting of that part of the lake.

The investigation completed in April 2021 identified several significant fauna species and made the following recommendations:

Within the report it recommends restricting works between August and March, due to migratory birds and frog breeding, which leaves the period April to July to do any significant on site works. Council intends over the coming months to develop a removal plan that will better define areas of works and methods of removal to minimise any potential impact. This means there won’t be much change over the next six months or so but it should be possible to begin any works from April 2022.

We were well served by our office-bearers, especially Secretary Sandra Thorn and Treasurer Vesna Djuric, and the organisation of work days by Vice-President Richard Leppitt who, together with Andrew Thornton, prepared sites for planting by auguring-out the holes! Our peripatetic efforts were supported by Andrew Webster and Suzette Rodoreda from Hobsons Bay City Council, and by Shaun Davis from Parks Victoria. We are lucky to have such people to work with.

This year has been a good one for migratory waders in our wetlands. 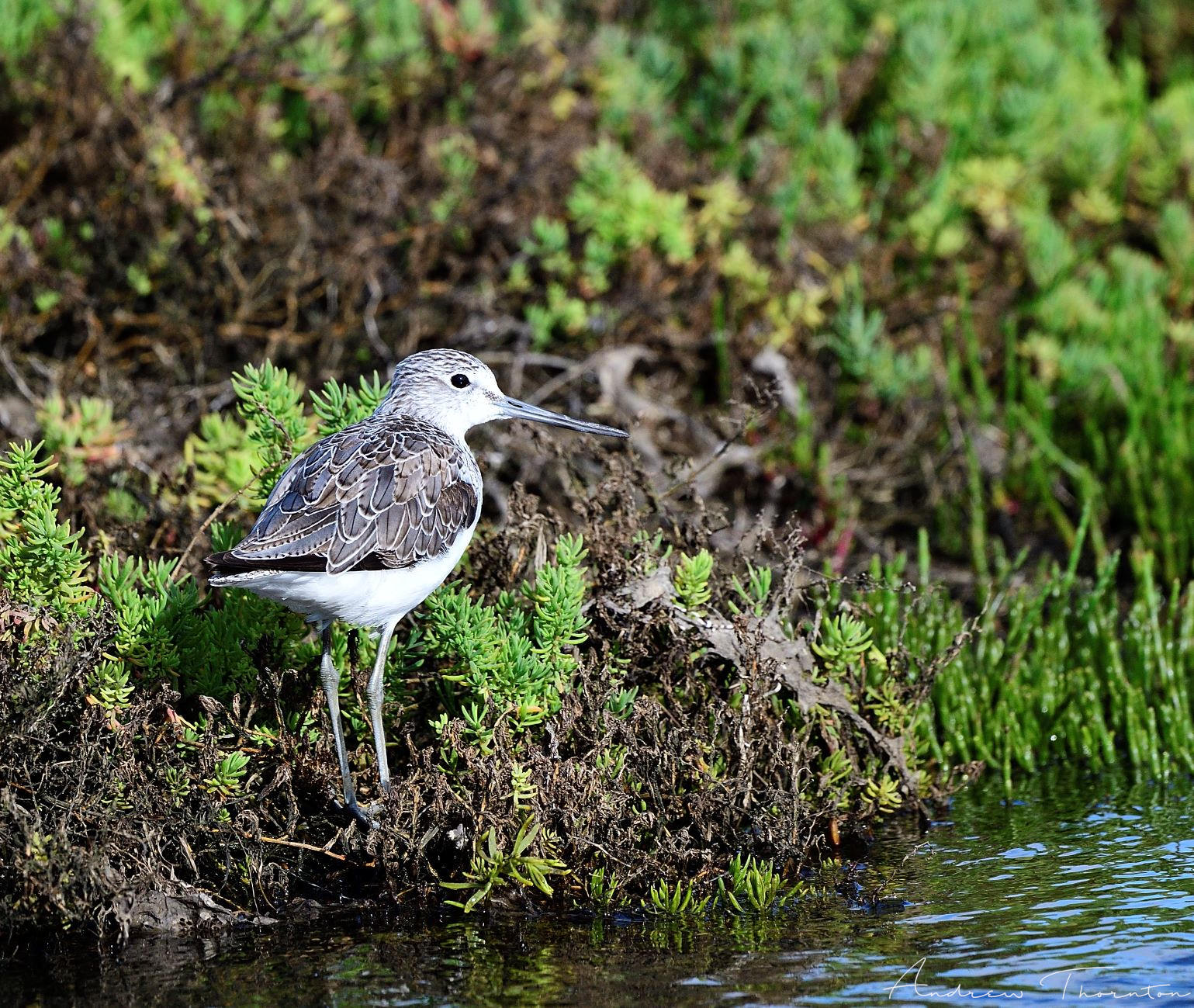 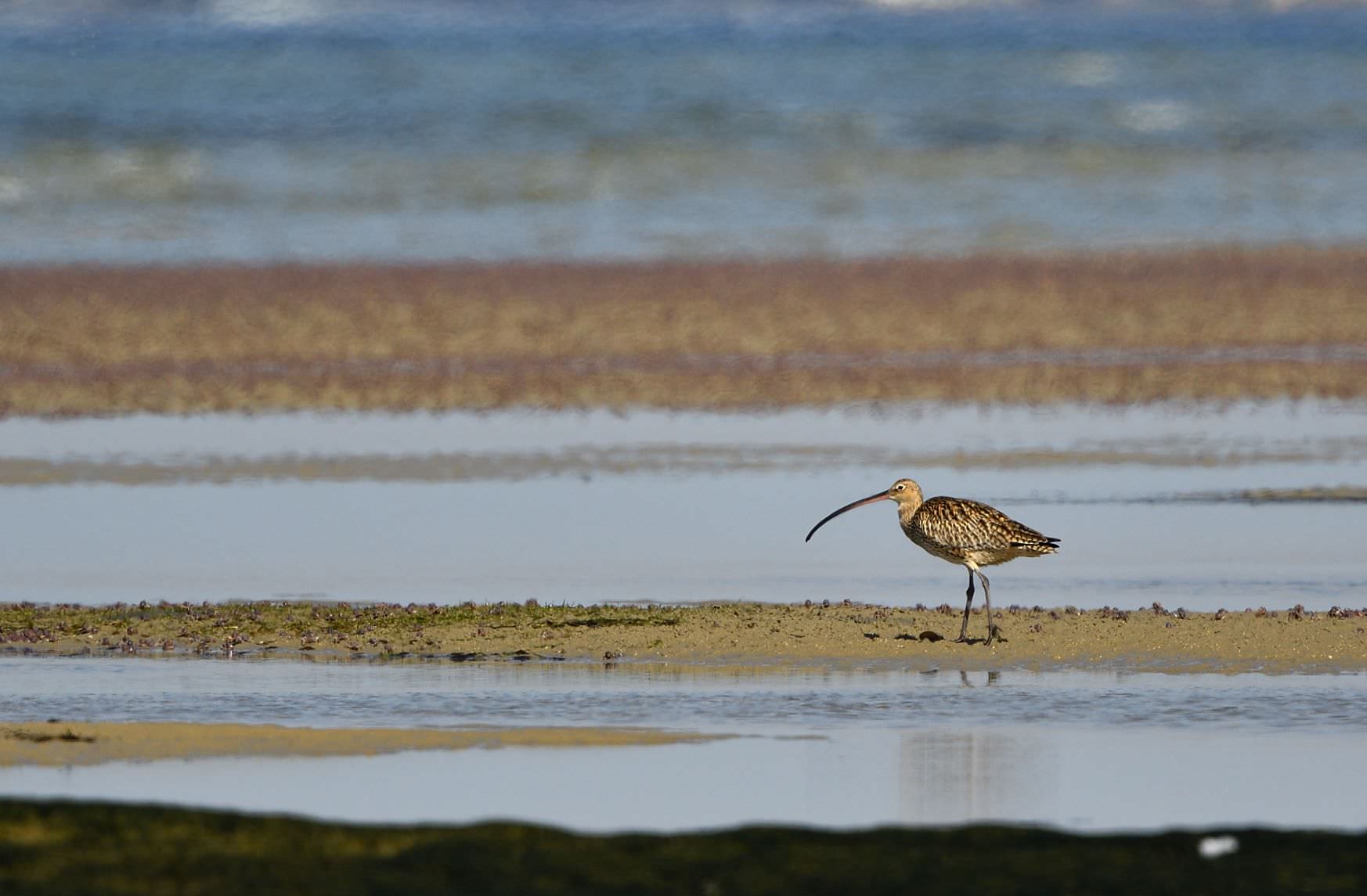 Over the summer we’ve also had Bar-tailed Godwits feeding on soldier crabs and sand-worms at Wader Beach and on the sandbar.

Red-necked Stints have been observed in good number this summer. The conservative count of these birds was 2000 plus, feeding out of the mudflats and roosting down at the Battery Rd rocks. A small number of juvenile red-necked stints have also been recorded overwintering here. 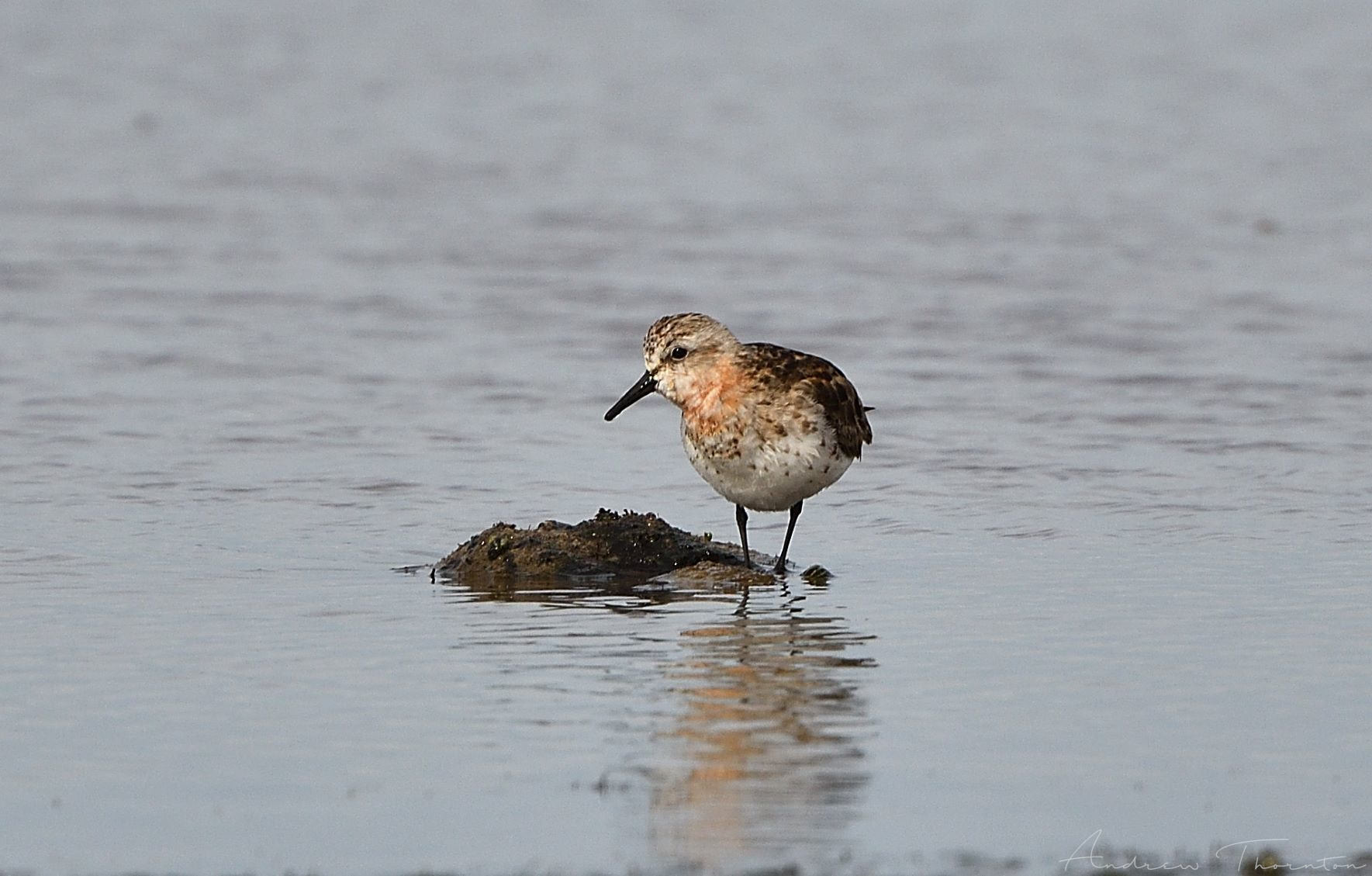 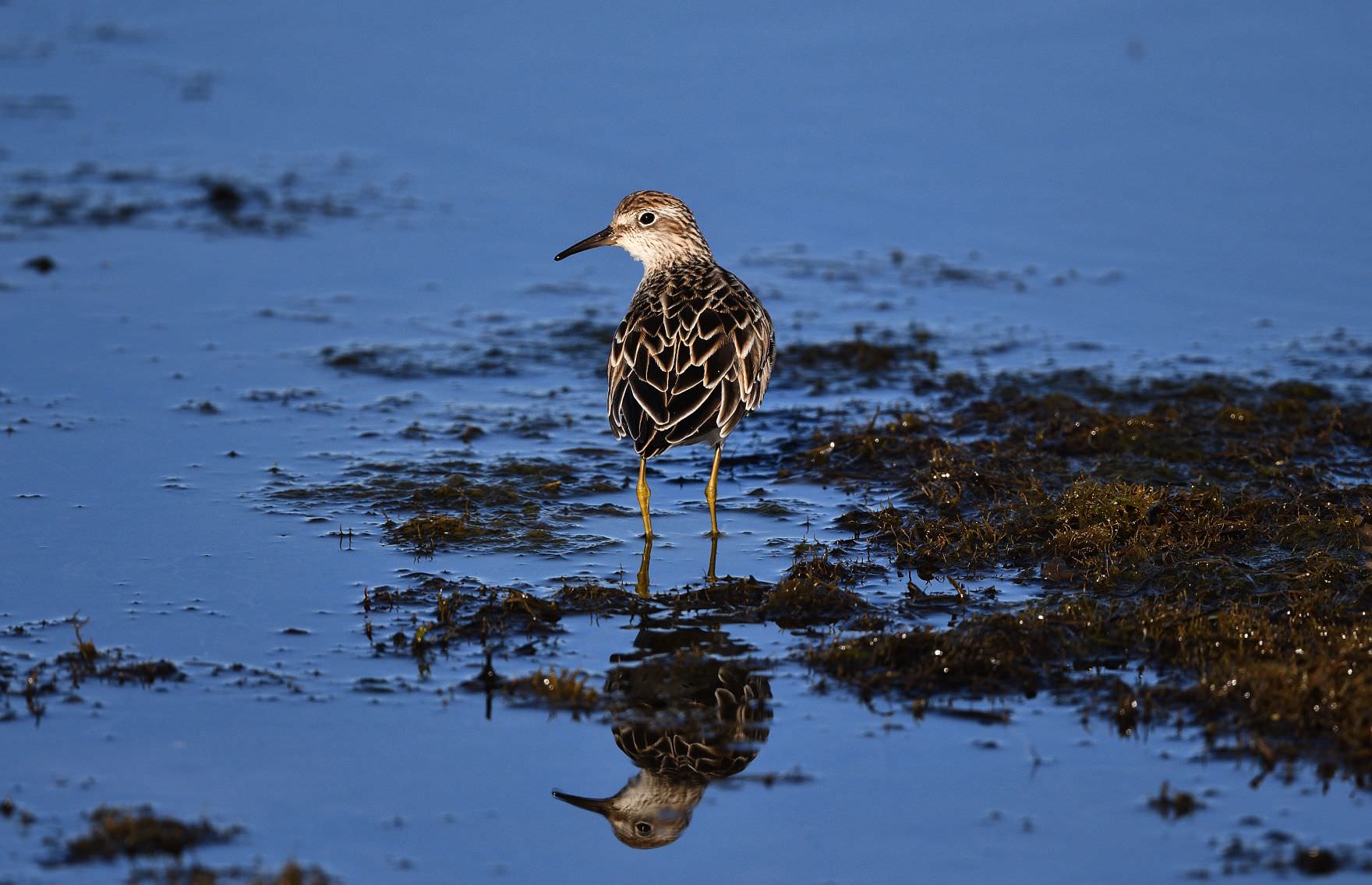 We have had three highlights this year, the overwintering whimbrel, sightings of eastern curlews and the grey plover. All three events caused a massive influx of keen birders hoping to catch a glimpse of these interesting migratory waders. 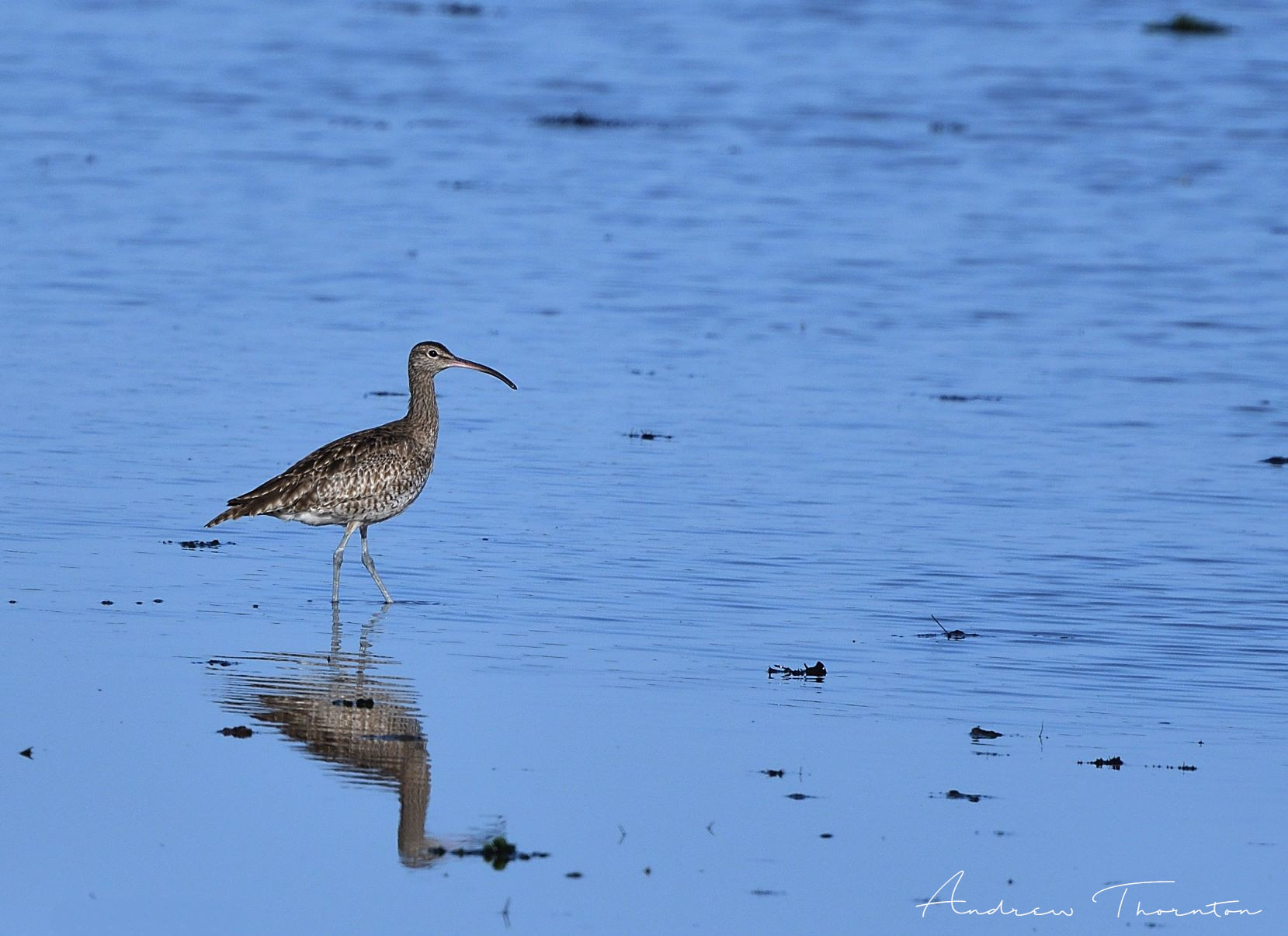 This beautiful little bird can be found at the Williamstown Wetlands during spring and summer. When sunlit at the right angle you will see a wonderful iridescent glittering green on its wings. This contrasts against the barring on the chest and side. When shaded the bird appears duller. 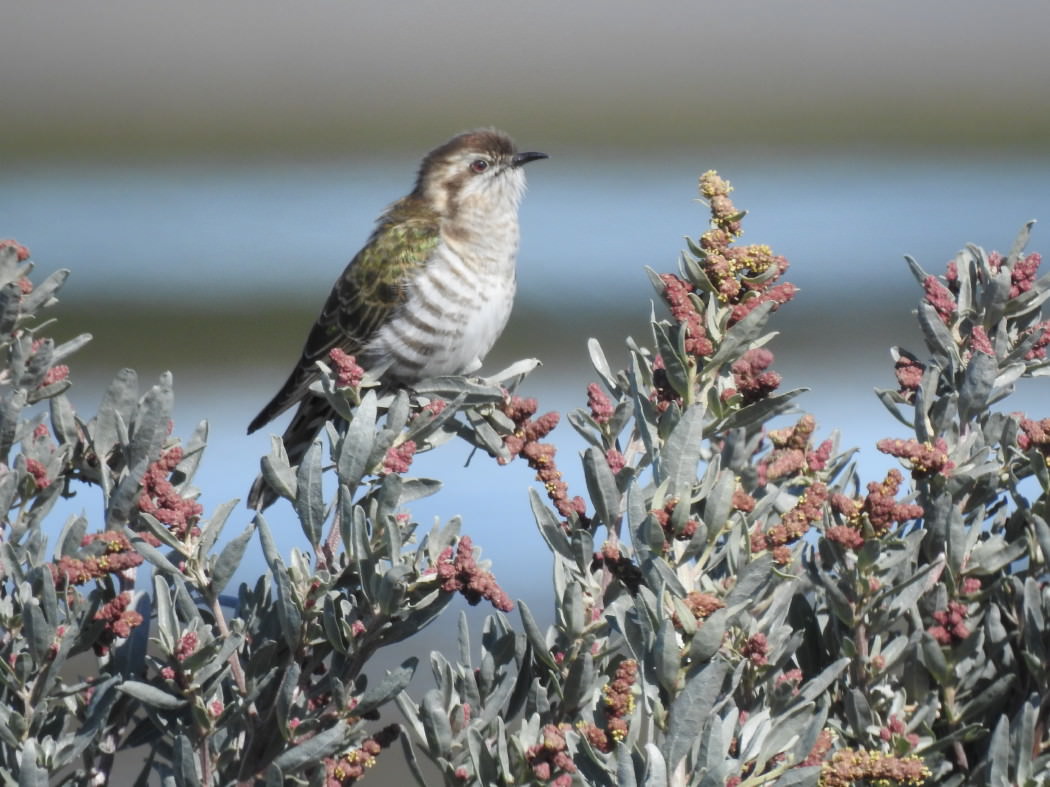 Mature birds will typically perch in a prominent position to call and look for insects. The call is a descending whistle that can be heard persistently and from a long way off.

The Juvenile Horsfield’s Bronze-Cuckoo is duller than the adult and also lack the barring on the underparts. Look closely at the below picture and you can see the diagnostic white eyebrow and dark eye stripe just starting to show.

Horsfield’s Bronze-Cuckoo’s are brood or nest parasites, in other words they lay their eggs in another species nest and let them incubate the eggs and raise the young. 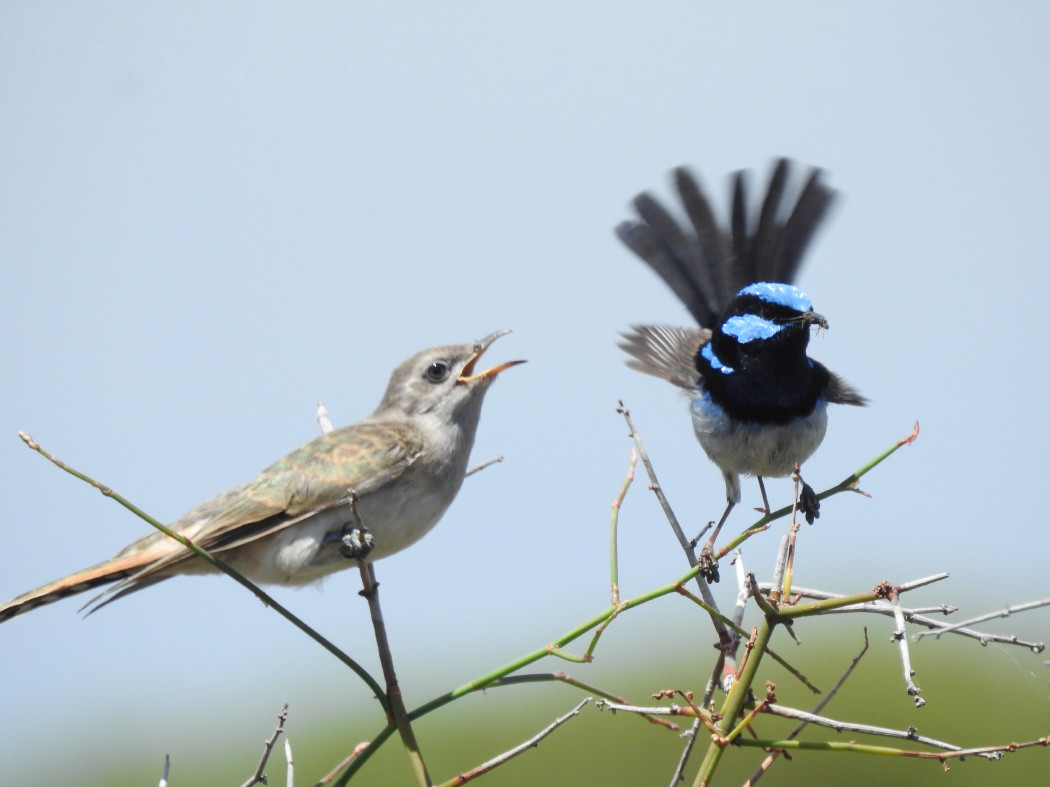 For more information about this bird, see http://www.birdlife.org.au/bird-profile/horsfields-bronze-cuckoo. 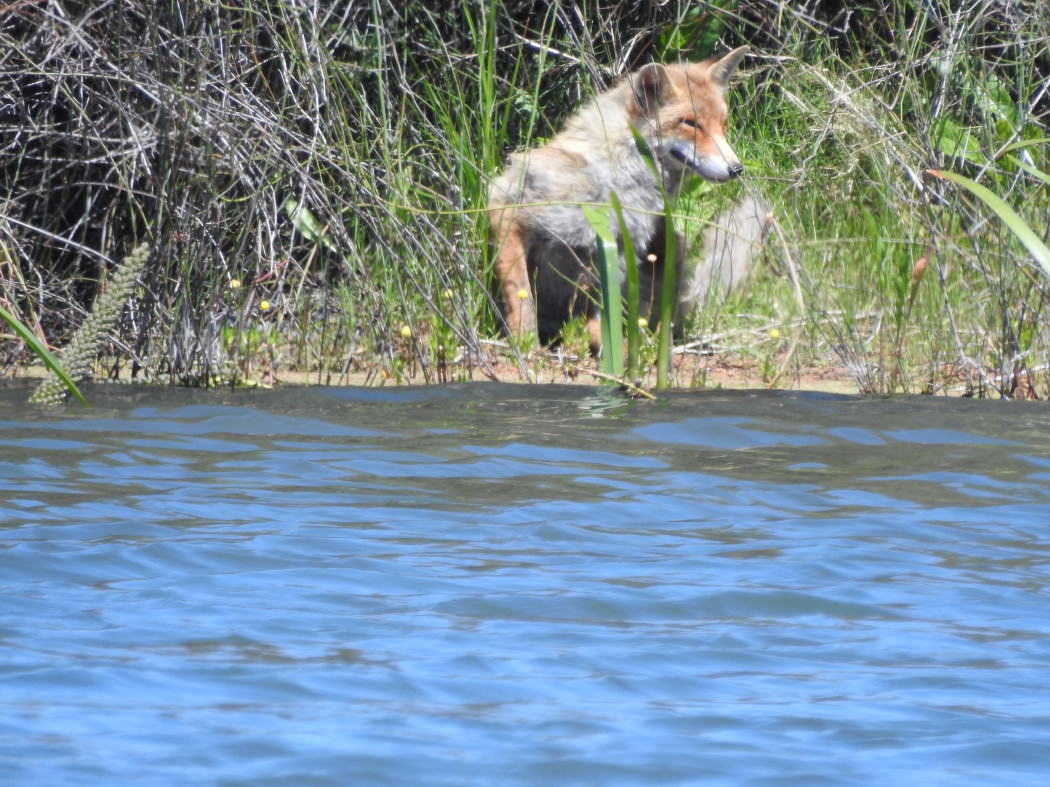 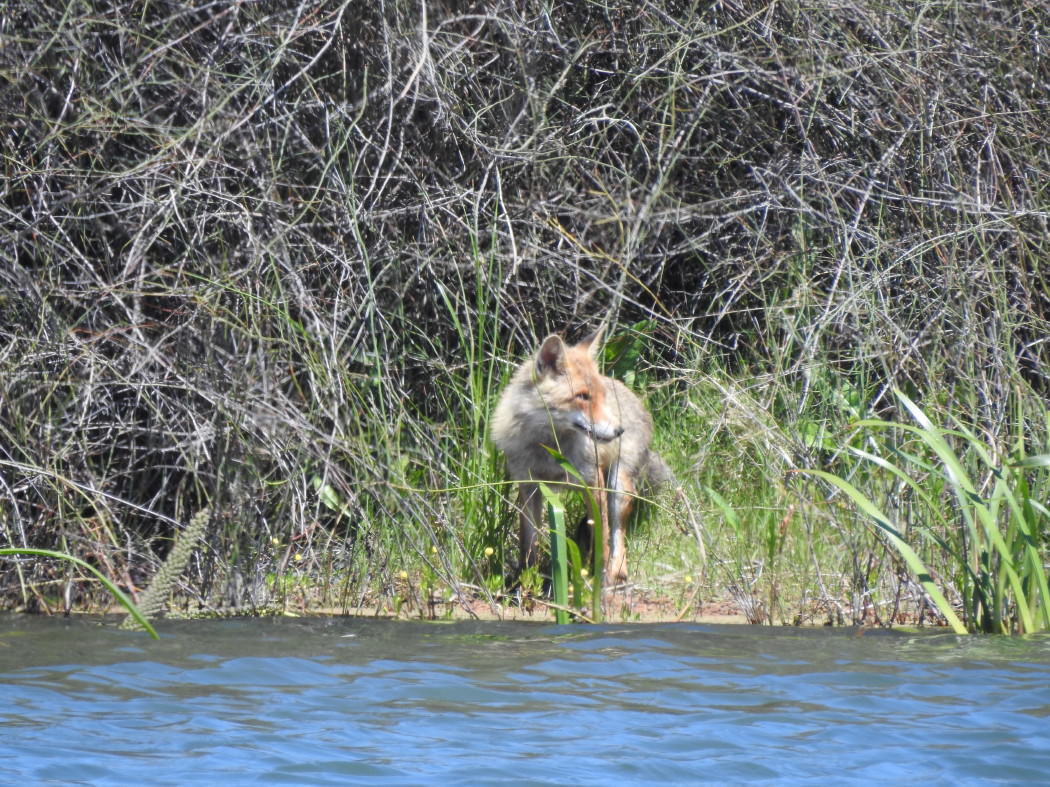 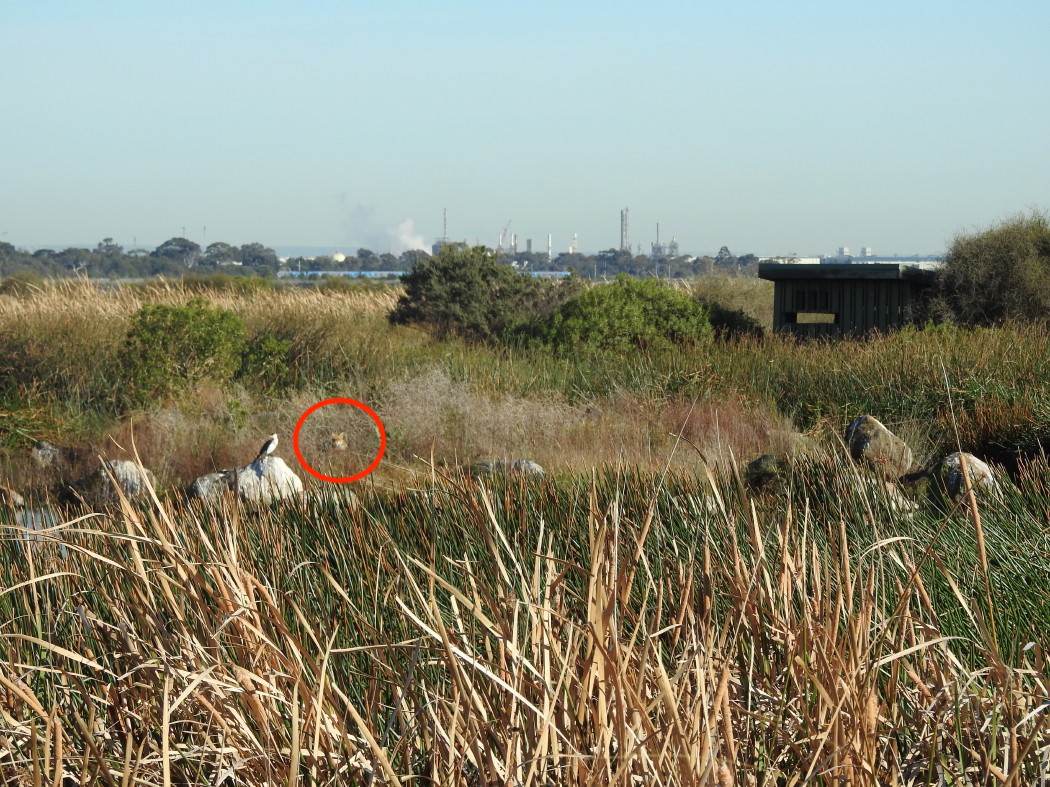 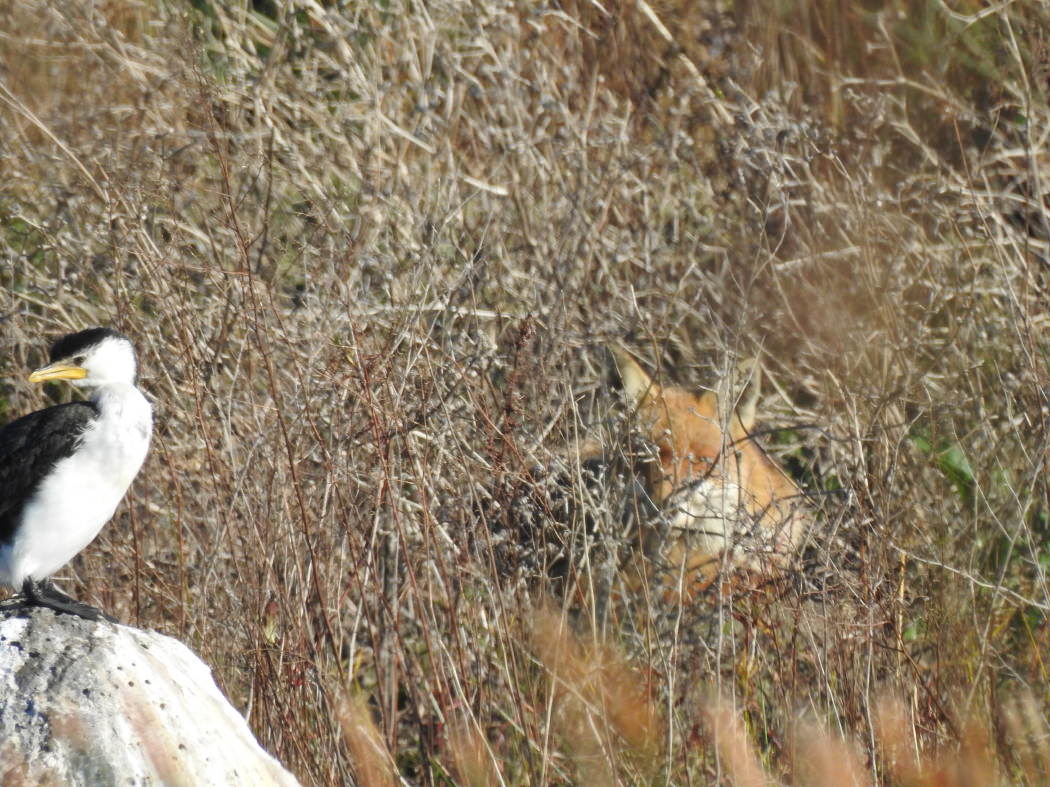 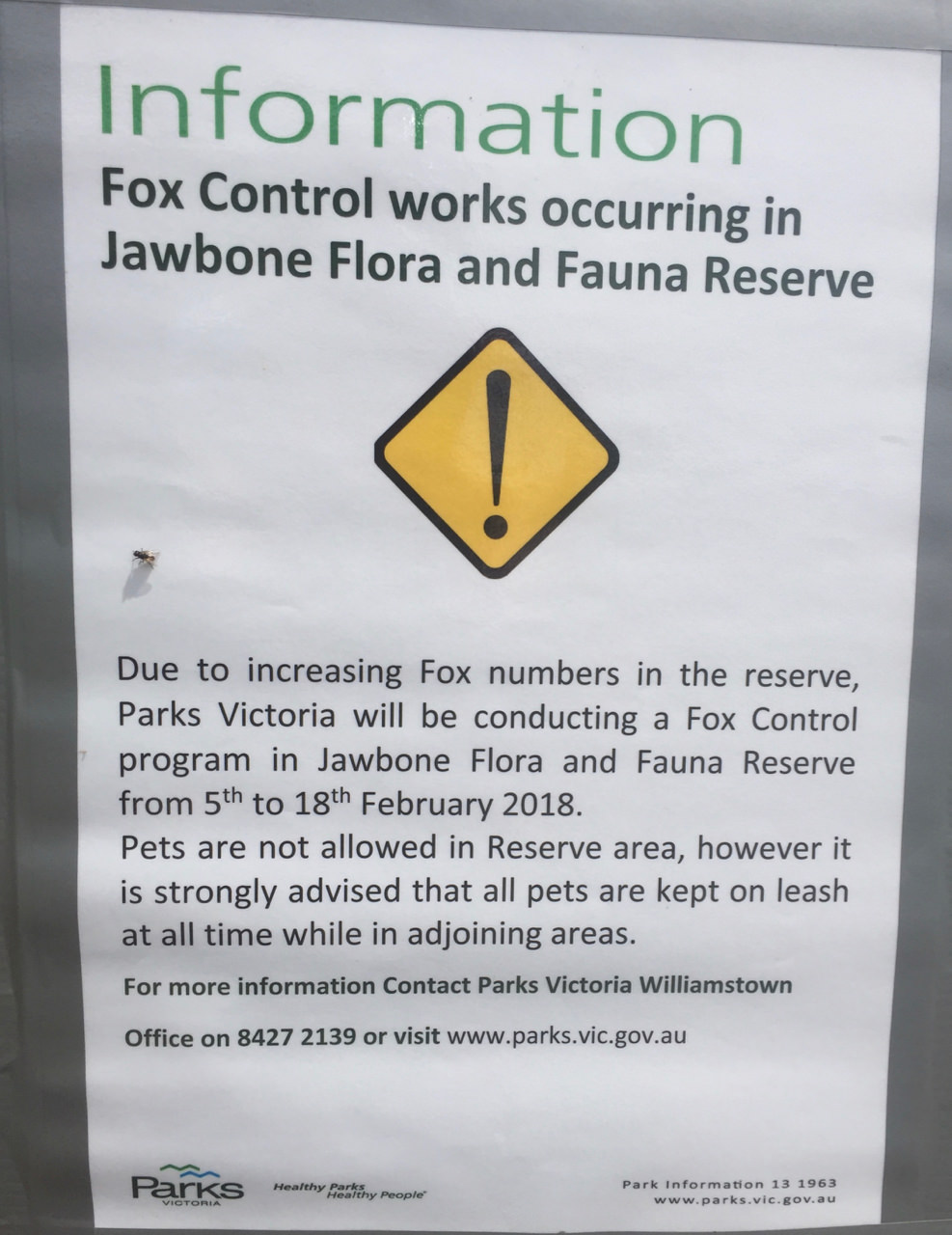